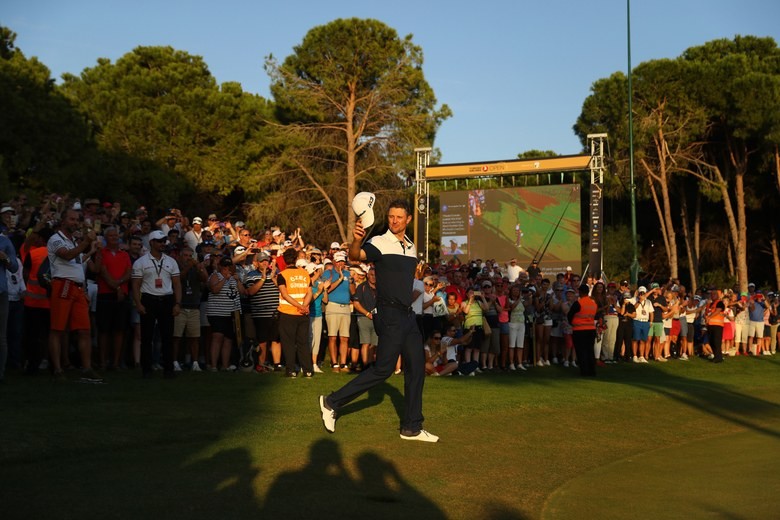 There was more than a little bit of stumbling and fumbling along the way, but Justin Rose eventually claimed the Turkish Airlines Open title in a playoff with Li Haotong. The pair, two-thirds of the final group on the final day, had earlier tied on 17 under par over four rounds at the Regnum Carya Golf & Spa Resort on Turkey’s southern shore.

Which sounds pretty good only until a wee bit more detailed look at the leader board reveals Rose reached 19 under par after 70 holes. And that both men were 18 under on the 72nd tee. In other words, Rose, the defending champion and needing a win to get back to World No. 1, finished bogey-bogey; Li contented himself with a dropped shot at the last, taking four shots to get down from just under 150 yards. Pretty this was not.

And it got worse.

After watching Rose two-putt for par from roughly 25 feet on their second visit to the 18th green, Li settled down over his 12-footer for birdie and what would have been his third European Tour victory. Would have been. Never online, the ball missed low and left and, not insignificantly as things turned out, ran maybe a yard past. The second putt was … how to put this … awful. Really awful, the ball missing the cup by maybe an inch on the right.

The sad thing was, over their first 16 holes, both men had put on a terrific display. Yes, each rode his luck at times, but the general standard gave no hint of the carnage that was to follow. Li’s pars at the seventh and eighth holes had more to do with good luck than good judgement. Rose’s pitch to the par-5 12th was headed well past until it struck the pin and stopped a few feet away. And one hole later his tee shot was headed for oblivion in the right trees until it hit an unfortunate individual on the left knee (yes, Rose did shout “fore!”).

Otherwise, each played some terrific stuff. Li’s highlight was a 3-wood to the par-5 15th green that pulled to a halt no more than two-feet away, the resulting eagle hauling the Chinese player into a tie for the lead on 18 under par.

Rose was his usual clinical self—at least until his last two holes in regulation. Not one bogey and five birdies dotted his card to that point.

“There were moments out there where it looked like both of us weren't holding our nerve very well,” said Rose, who picked up €1,166,660 for what was the first successful defense of a title in his career. He also moved to third in a Race to Dubai, although he cannot win that year-long race to go with his FedEx Cup title on the PGA Tour. For reasons he was loathe to reveal—“they will become apparent next year”—Rose said rather mysteriously that he will not be playing in the season-ending DP World Tour Championship in two weeks.

“But this was a fun battle overall,” he continued. “And obviously I do have to spare a thought for Haotong. That was a tough way to finish. He hit a positive putt to try and win, but that 18th green is very tough. Getting back to No. 1 is something to be proud of. It doesn't make you one under par on the first tee the next time you play, but it's something to be proud of for sure.”

As for Li, who had started the day with a three-shot edge over Rose, even his broken English was up to the task of conveying exactly his understandable disappointment.

“It is a tough day for me,” said the 23-year old, who memorably outdueled Rory McIlroy down the stretch to win the Dubai Desert Classic in January. “I think I played well the whole week, but didn’t hole a few putts on the last and that was it.”

A little further down the leader board there were signs of redemption for two Grand Slam champions whose recent play has been more minor than major. Former U.S. Open and PGA champion Martin Kaymer’s closing 66, five under par and bogey-free, lifted the German into a tie for fifth alongside Lucas Bjerregaard of Denmark, one shot head of Danny Willett.

“I played very well,” confirmed Kaymer, who dropped only two shots all week. “I could have made a few more putts here and there, but the game was really spot on this week. I think I gave myself enough chances, and I needed a good finish to get into (the season ending DP World Tour Championship) in Dubai. Hopefully that was enough. But I’m really looking forward to playing next week [when the European Tour plays its next playoff event in his native South Africa]. I’m very close.”

Former Masters champion Willett had less to say about his T-7 finish, but the Englishman, one of 20 in the 78-man field, must have been encouraged by his play after so long in the doldrums. In recording his third top-10 of the season and only his fifth on the European Tour since winning at Augusta in 2016, the 31-year-old Yorkshireman hit an array of splendid shots. As with Kaymer, only his putting let him down over the closing holes.

Which was a familiar tale at the end of an ultimately strange day.